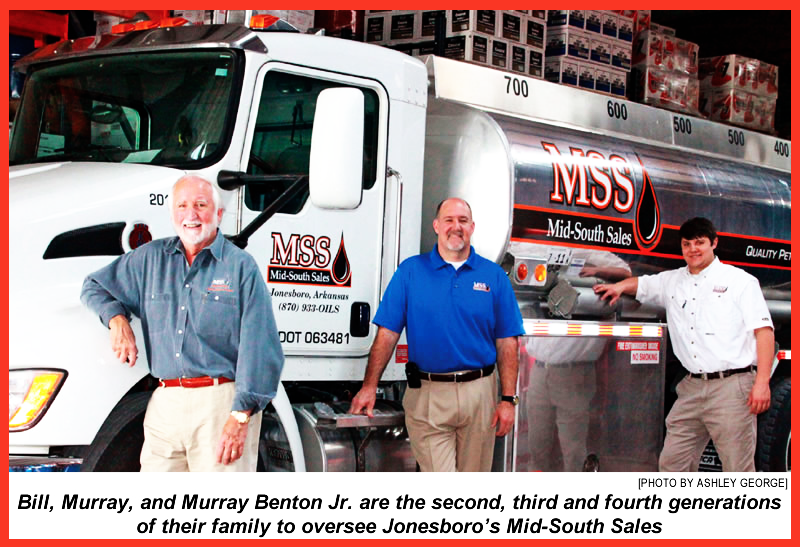 Mid-South Sales, Inc. (MSS) began as a small, family-owned business in 1947 supplying farmers with fuel, tires, batteries, and other tractor or automotive accessories from a bulk plant in Helena, Arkansas. What began as a small wholesale oil and fuel distribution company, MSS has grown to be one of the largest privately-owned oil companies in Arkansas. With their headquarters in Jonesboro, Arkansas and six other locations throughout the state, MSS sells diesel fuel, gasoline, aviation fuel, motor oils, hydraulic oils, gear lubricants, greases, etc. to a wide variety of industries. Farmers, implement dealers, manufacturing companies, municipalities, car dealerships, oil change shops, tire stores, and trucking companies make up a portion of the large customer base.

Mid-South Sales has been a family business now for more than 70 years. M.O. Rasberry, the founder of MSS, was a multi-state tire salesman and growing tired of the travel of his sales job, became an entrepreneur and used his prior sales experience to build the business. Originating as full-service gas stations complete with employees who would pump gas and wash cars for customers, Rasberry, with the help of his son-in-law Bill Benton Sr., started converting to self-service stations and convenience stores in the early 1970’s. In 1976, Rasberry sold the business to Bill Benton Sr. and for the next 35 years, Benton grew the company into a regional convenience store chain along with a growing wholesale fuel and oil distributor. During that period, Murray Benton Sr., Bill’s son, joined the company and focused on the wholesale business. The retail convenience stores were sold in 1998, and Murray Benton Sr. has led the company’s change in focus to grow the wholesale business with many acquisitions and improving efficiencies by working with suppliers on pricing while also growing his sales team. Bill Benton Sr. sold the business to Murray Benton Sr. in December of 2012. Murray Benton Jr., the fourth generation, has since joined the company which will allow further growth of the company. MSS currently has 7 locations in Arkansas and delivers to customers in Mississippi, Tennessee, Alabama, and Missouri. MSS is looking to expand through business opportunities and acquisitions.  In January of 2019, MSS sold to Cadence Petroleum Group of Asheboro, NC. (www.cadencepetroleum.com)